For photos of pay phones from around the world,
go to this neat web site:
The Pay Phone Project.

"Pay telephone stations preceded the invention of the pay phone and existed as early as 1878. These stations were supervised by telephone company attendants or agents (such as an employee in a hotel where a station might be located) who collected the money due after people made their calls. Some pay stations utilized a fail-safe collection method: After making the connections for customers, attendants would lock them in booths so they couldn't leave without paying.

In 1889, the first public coin telephone was installed by inventor William Gray at a bank in Hartford, Conn. It was a "postpay" machine (coins were deposited after the call was placed). Gray's previous claim to fame was inventing the inflatable chest protector for baseball.

In 1898, the Western Electric No. 5 Coin Collector, the first automatic "prepay" station, went into use in Chicago. The depositing of coins before placing a call would gradually become the norm in pay phones until the introduction of "dial tone first" service in 1966.

In 1905, the first outdoor Bell System coin telephone was installed on a Cincinnati street. It wasn't an instant hit; people apparently were reluctant to make private calls on a public thoroughfare. (Moose were not as shy when they first encountered outdoor pay phones. When Bell Laboratories designed a new glass and aluminum outdoor telephone booth in the 1950s, it was a great advancement over the wooden outdoor booths that had been in use for a number of years. And yet several booths ordered by the U.S. National Park Service were found mysteriously broken and battered. Park rangers soon knew the answer, though: It was mating season for moose. Amorous--but territorial--bulls were charging the booths whenever they saw their reflections in the glass.)

The result of that agreement, the 50A coin collector, went into production in 1911. By the end of 1912, 25,000 of these coin telephones had been ordered for New York City alone. The 50A model had three coin slots--for nickels, dimes and quarters --and was a "prepay" machine. The basic design, though often modified, was so practical and reliable it remained in production until 1964. In 1965, Western Electric introduced the 50A's successor. Among other things, it had a single coin slot instead of three, and electronic signalling of coins deposited replaced mechanical bells.

The booths that house pay phones have undergone more design changes than the phones themselves. At the turn of the century, indoor booths were constructed of durable hardwood, such as mahogany, with comfort and privacy in mind, and exhibited detailed craftsmanship. They were often carpeted. The "original" telephone booth is credited to Thomas Watson, the man who helped Alexander Graham Bell invent the telephone. Watson's "booth" was made by draping blankets over the furniture in his room and crawling underneath to conduct early telephone experiments. One story says Watson, in order to hear, was insulating himself from street noises. Another story is that his landlady ordered Watson to be quieter; his shouting, albeit for the sake of science, was disturbing other boarders. In 1883 Watson designed a real booth. It was built of expensive wood, had a domed top with a ventilator, windows with screens, and a desk with pen and ink. Over the years, telephone booths have reflected their surroundings as well as the times. There have been phone booths resembling cable cars in San Francisco, and others resembling pagodas in New York City's Chinatown district. In the 1960s, as American architects designed glass-wall office buildings, wooden phone booths looked out of place in lobbies. Bell Laboratories designed an indoor glass and metal phone booth to better fit newer surroundings. Not all of the designs for phone booths have reached the market. An experimental "hands-free" booth in 1972 featured a microphone in front of the caller and a loudspeaker in the booth's ceiling. Observers noted that people readily tried the new arrangement but that, conditioned to speaking in the direction another voice is coming from, they were all shouting into the ceiling.

In 1950, the first coin telephone mobile train service was established on the Pennsylvania Railroad between New York and Washington.

"Calling from your car" was first tested in Mobile Ala., and Chicago in 1957. Drive-up pay telephones proved popular and are still in use today.

In 1960, the Bell System installed its one millionth pay telephone.

In 1964, when the U.S. Treasury Department decided to change the metallic composition of U.S. coins, it consulted with Bell Laboratories to ensure the new coins would still function properly in pay phones.

"Dial tone first" service was introduced in 1966 in Hartford, Conn. This essentially turned coin phones into emergency call stations because such calls could be made without first depositing coins.

In 1977, "automatic coin telephone service" was introduced in Phoenix, Ariz. This allowed most pay telephone calls, including long-distance, to be made without operator assistance. A computer-controlled synthesized voice gave customers the necessary instructions.

In 1984, AT&T introduced the AT&T Card Caller, which featured a video screen with dialing instructions and allowed customers to charge calls by inserting an AT&T Calling Card. The Card Caller also was the first of AT&T's public phones to feature a "loud" button, which allows callers to control the listening volume. It helps the hearing-impaired as well as those having a hard time hearing because of environmental noise.

In 1990, AT&T introduced the AT&T Public Phone 1000, which features a data port for laptop computer and portable fax use, speed dialing for select AT&T services and travelers assistance. This tabletop phone was designed primarily for airline lounges and hotels.

The latest advance in pay phone technology is the AT&T Public Phone 2000. Introduced in the fall of 1991, the Public Phone 2000 has a built-in keyboard, a data port and a nine-inch color monitor. Besides offering all the traditional voice services, it enables travelers to use an array of services never before available from a pay phone. Public Phone 2000 users can access electronic mail and online databases, connect a portable fax machine or computer, obtain language translation services, speed-dial travel assistance services and even get weather forecasts." 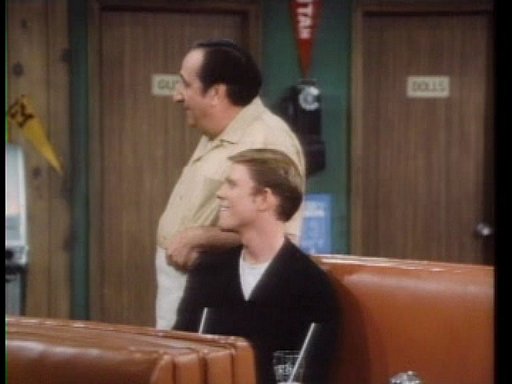 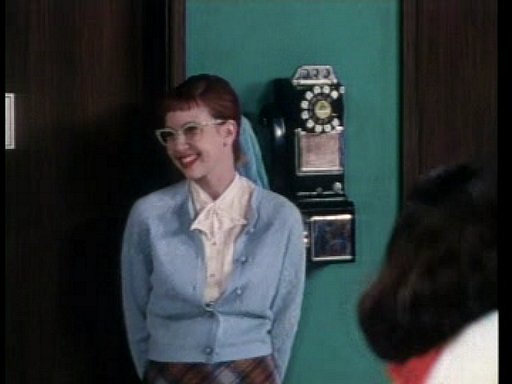 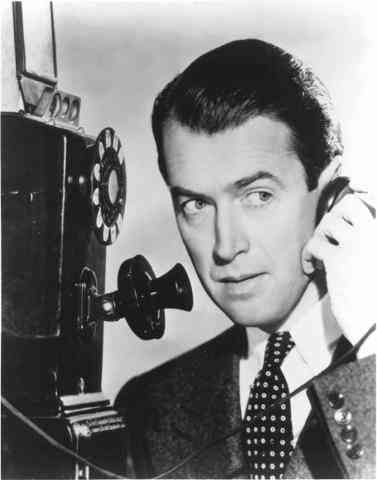 Guess who this famous person is?  Hint:  "It's A Wonderful Life". 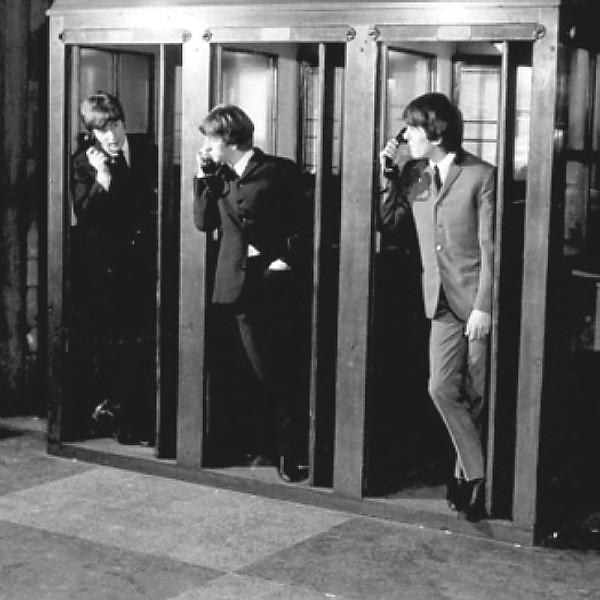 If you are a baby boomer, you should recognize these guys!

You'll find lots of payphone photos from around the world at:
http://www.payphone-project.com/payphones/photos/ 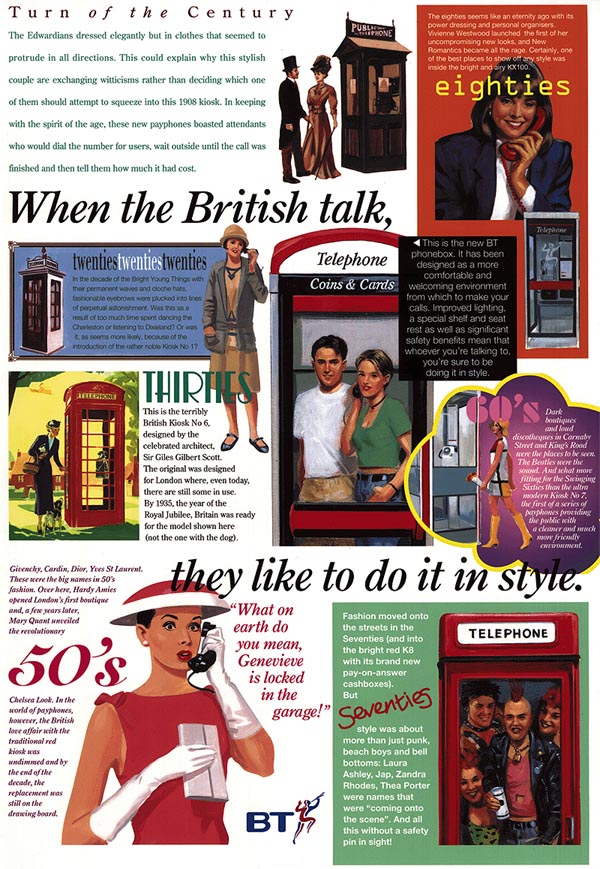 Remember when nostalgia was in fashion ? This poster featured recently in new BT Payphones.
Courtesy of BT Payphones (http://www.payphones.bt.com/2001/about/education/facts.html)